For Yvette Egan, MS, RN, creating a learning experience that pairs nursing students with healthy, community-dwelling older adults was in the cards. Literally.

“I came back from the FLAG workshop pretty excited,” Egan remembers. “I was chatting with my significant other’s mother, and she was talking about her friends who play bridge. There are eight people in her bridge club, and her long-time best friend had eight in her bridge club. All were ladies in their 70’s and 80’s who know each other and mostly live in the same area. I thought, ‘That’s kind of neat. Eight people in a bridge club matches the number of students that I have in a clinical group.’”

Egan asked her card-playing contacts if they would be willing to meet with her junior year nursing students a few times, one-on-one. They agreed, and Egan’s Older Adult Project launched in 2012.

The project has continued, with minor changes, since then. Each nursing student meets with their partner four times over the fall semester, often at the older adult’s house. They discuss topics that the students are learning about, including nutrition, cognitive function and mobility. The students practice using tools, such as home safety assessments. During their last meeting, the student presents a five-minute teaching project on a health-related topic that interests the older adult.

Students “were surprised that an older adult is busy and connected and engaging and fun and active in the community,” says Egan, who is thrilled to see the students’ perceptions of older adults change. “I wanted to develop something that would challenge the biases that students might hold.”

“Over their three clinical rotations as a junior, nursing students are probably going to get an older adult patient assigned to them, but that’s seeing someone who’s sick. My goal is to help students understand that the older adult who’s in that bed needs to get home and function independently, as they did previously.”

The Older Adult Project helps students develop nursing skills, such as therapeutic communication. That’s “focusing on the patient but sharing enough about yourself that the patient feels comfortable and trusts you,” explains Egan. “It’s a difficult thing for students to learn. They need to practice it repeatedly. They also need to understand that a therapeutic relationship is different than a friendship or family relationship.”

After a few successful years, Egan wanted to expand the Older Adult Project beyond her 16 junior year students. She found an eager partner in Barb King, PhD, APRN-BC, an assistant professor who teaches “Essentials of Gerontological Nursing” to the entire senior class at the UW–Madison School of Nursing.

“It’s a beautiful fit,” says King, because “it’s all about older adults, building communication skills and applying the assessment tools that we talk about in the course. It also helps students see older adults in a different light.”

Not surprisingly, the biggest challenge in expanding the Older Adult Project was recruiting enough community members for 150 students. Egan worked with the University League, a group that supports UW–Madison through scholarships, volunteering and programs, to make it happen.

“I thought the idea of the University League collaborating with the School of Nursing was a great idea from the get-go,” says Kay Jarvis-Sladky, the group’s immediate past president. It took multiple contacts—including a newsletter article and annual meeting presentation—but University League members came through.

Perhaps the most enthusiastic volunteer was Mary Jo Willis, a UW–Madison School of Nursing emerita professor who had taught Egan in the nurse practitioner program. 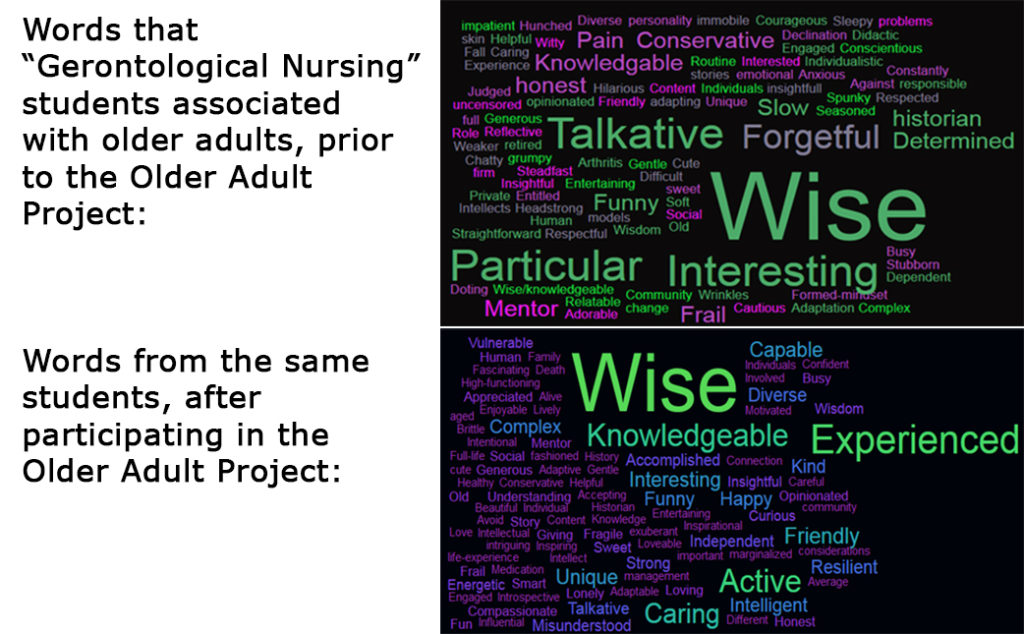 When Egan described the Older Adult Project, “She stressed that many of these students may have never had an older adult in their lives, and that this experience would be critical to helping them gain confidence in interviewing and assessing older adults,” remembers Willis. “What a wonderful opportunity for University League members and myself. We want to give back by helping the next generation of learners.”

King appreciates the joint recruiting effort, as the project provided “a much richer learning environment” for her students.

“I think the experience will make me a better nurse,” says Katja Kane-Foempe, who participated in the Older Adult Project during both her junior and senior years.

“It gave me insight into how what you tell patients has to be translated for their home life. When you print out hospital discharge papers, they include all these instructions that aren’t personalized at all. You need to go through them with the person and ask if each is feasible, if they’re able to do them or if they need help.”

Kane-Foempe admits that, before the Older Adult Project, “I had a somewhat negative perception of aging. But both of the older adults who I met with are more active than I am. They’re more in charge of their health, very knowledgeable and actively maintaining a healthy lifestyle.”

That students and community members both enjoy and benefit from the Older Adult Project is exactly what Egan hoped would happen.

“I always have the Wisconsin Idea in the back of my mind, when I’m doing projects like this,” she says.