“An ombudsman is the voice of the people—that’s the literal translation of the word,” Kim Marheine tells some 150 undergraduate students at the University of Wisconsin–Madison School of Nursing.

“I’ve never worked anywhere other than long-term care. I was that 15-year-old nursing assistant. I worked in a tiny little nursing home out in the country with only 21 beds. I learned great skills from the nurses who I worked hand in hand with, every day. They inspired me to pursue a career in gerontology.” 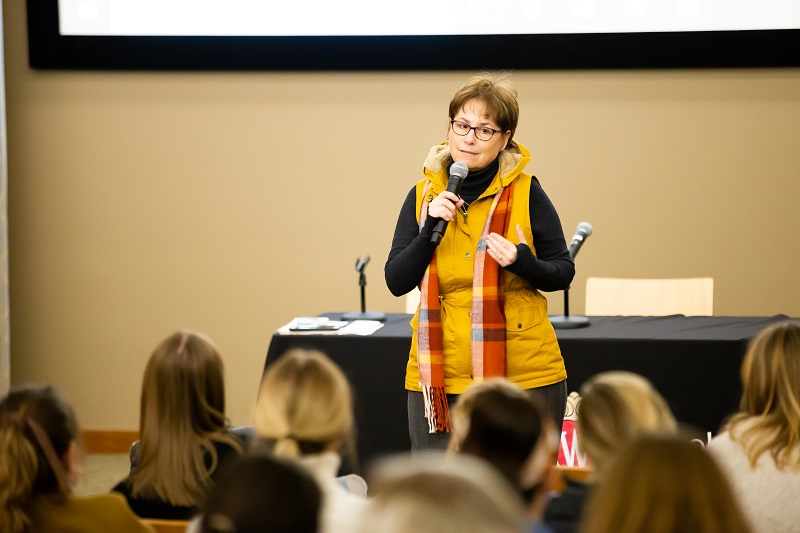 Today, Marheine oversees a staff of 23 within the State of Wisconsin’s Board on Aging and Long Term Care. There are 18 regional ombudsmen who serve all of Wisconsin’s 72 counties and other staff with specialized areas of long-term care advocacy.

As part of a Congressionally-mandated pilot project in the 1970s, “Wisconsin was one of five states that developed nursing home ombudsman programs” she tells students. “Those pilot programs were found to be so successful that Congress said every state in the nation needs a long-term care ombudsman program.”

“At first, we only advocated for persons living in nursing homes. Gradually that expanded to include assisted living communities,” says Marheine. “Today, Wisconsin is a leader nationally, because our ombudsman program also advocates for persons who receive community-based long-term care services. All told, we serve almost 130,000 consumers and their families.”

Ombudsmen advocate for people age 60 and older who live in long-term care settings, or who receive home and community-based services through Wisconsin’s managed care or self-directed support programs.

In 2018, the most common complaints to Wisconsin’s long-term care ombudsman program involved care plans or assessments; discharges or evictions; disrespectful staff attitudes; failure to respond to requests for assistance; and barriers to exercising choice, or civil or religious rights. Ombudsmen do not investigate allegations of abuse, but can assist with reporting allegations and ensuring that the person’s rights to due process and victim supports are respected throughout the investigation.

“Some of our biggest complaints today are about staffing shortages,” says Marheine. “Sadly, we see negative outcomes” from low staffing levels, such as weight loss, pressure ulcers, and incontinence that can’t be explained by health conditions.

“The ombudsmen are out in nursing homes and assisted living communities to protect and encourage others to respect the rights of the people who live there. We also try to influence legislation and systems change,” says Marheine.

She’s a big believer in the power of nurse leadership.

“If you are a leader or aspire to be one, nursing homes need you,” Marheine tells the nursing students.

“You will make many independent decisions. You will lead teams. You will build relationships, not only with the other staff who you work with, but also with residents and their families and visitors,” she says. “It is a really unique environment.”

“It is where people live,” she adds. “Somebody may knock on your door to sell you Girl Scout cookies. In a nursing home, somebody knocks on a resident’s door many, many more times a day, and for interactions that are so much more personal.”

Nurses who work in other settings can also support the well-being of long-term care residents.

“Many times, acute care nurses witness family interactions,” says Marheine. “If you know that patient is going to this nursing home and you have a heads up that there could be a volatile situation, let someone at the nursing home know. Know and use those resources. Acute care nurses call ombudsmen all the time.”

Marheine thanks the students for pursuing a career in nursing.

“You will be caring for the people who built our communities and families,” she says. “There’s nothing more important or fulfilling than that.”