“By the age of seventy, on average people have at least two chronic conditions. Many will have more than that,” says Parminder Raina, PhD, the director of the McMaster Institute of GeroScience in Ontario, Canada, and a professor of clinical epidemiology and biostatistics. He spoke at the Annual Colloquium on Aging in September, organized by the University of Wisconsin–Madison Institute on Aging. 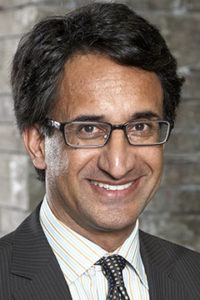 “The management of chronic conditions becomes very critical, because a lot of us want to live in our homes, function independently, drive our cars and go shopping,” Raina adds. But multi-morbidity—having two or more chronic conditions—makes that difficult, even dangerous, for many older adults.

To support healthy aging, researchers, health care providers, health systems and policymakers must better understand and address multi-morbidity. To do so, Raina argues that we need more and higher quality data on people’s aging experiences, collected and analyzed by inter-professional research teams.

Historically, “we have focused on a single disease, but we have not focused on people who have those diseases,” Raina says. “We don’t know yet which combinations of chronic conditions put people at risk for disability and premature mortality.”

In a study that followed more than 9,000 older Canadians for 20 years, Raina and colleagues looked at the impact of chronic conditions. The major drivers of limitations in activities of daily living (ADLs, such as feeding and bathing) and instrumental activities of daily living (IADLs, such as managing medications and finances) depended on age and sex, and whether chronic conditions were considered singly or in combination.

Looking at combinations of chronic conditions, which the authors argue “more accurately reflect the true picture of aging,” foot problems, arthritis and cardiovascular disease were most strongly associated with ADL and IADL limitations. Not only can “the prevalence of these three conditions … be reduced through interventions,” they note, but doing so may be an especially effective way to support healthy aging in older populations.

“We have spent an awful lot of money tracking diseases individually, but multi-morbidity is what is happening in the older population,” Raina says. “We’ve got to think of diseases as a cluster of conditions, and we have to think about the consequences of these conditions, not just the risk factors.”

The Canadian Longitudinal Study on Aging, on which Raina is the principal investigator, is designed to do just that. Launched in 2010, the study is following 50,000 people between the ages of 45 and 85, for at least 20 years. More than half of study participants answer questionnaires, undergo physical exams and provide samples every three years. The remainder does phone interviews every three years.

Researchers are collecting data on study participants’ lifestyle and health behaviors, health status and chronic conditions, functional abilities, workforce participation, social participation and supports, whether they give and/or receive care, and their demographics, including socio-economic status.

Among the questions researchers hope the Canadian Longitudinal Study on Aging will answer are:

It’s an ambitious undertaking. In addition to tracking Canadians, Raina and colleagues are harmonizing their data collection efforts with European researchers, to allow for even larger and more powerful analyses.

The data collected by the Canadian Longitudinal Study on Aging “will be available to any researcher, anywhere in the world,” according to Raina. His vision is that the information will “accelerate discovery that can be translated into practice, improving the health of the population.”