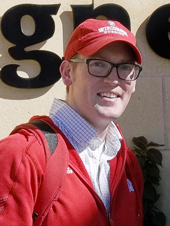 “Looking back at my undergrad experiences, I was in that group of people who were determined to be an ER or an ICU nurse,” says Lawrence, who received his BSN from the University of Wisconsin–Madison School of Nursing and is currently a student in the school’s DNP program.

“My last senior clinical was with home health. After I got exposed to the environment, I thought, ‘Oh, man, this is too cool.’ And I was fortunate enough to be able to get a job right out of school in home care.”

To provide quality care in an outpatient setting, especially with “elderly patients with co-morbidities and additional considerations from medical, psychosocial and economic perspectives,” Lawrence stresses, “you have to be a very good clinician.”

“When you’re in the community, like home care or a skilled nursing or assisted living facility, you can’t ask for an X-ray or telemetry or ABGs. You have to be able to use your eyes, ears, hands and what you see and feel in front of you to make a determination as to whether something is serious or just a little nuance, to be able to catch an early sign of a problem.”

“It’s one thing to be able to watch a patient’s creatinine rise,” adds Lawrence. “It’s another thing to watch someone’s affect change, and draw the same conclusion about the same problem.”

Providing care where the patient lives provides insight into what obstacles they face and which approach might best support their health. Getting to know patients over time—Lawrence estimates that his typical home care visit lasts 30 to 60 minutes—helps guide difficult conversations.

Lawrence explicitly acknowledges when he’s broaching a sensitive topic. “My standard preface is, ‘I have a strange question I have to ask you’ or, ‘This is going to sound odd,’ when it’s something that most people don’t want to hear,” he says.

Lawrence was once brought in to help an older woman manage her medications. Eventually, he realized that she was living with dementia.

“She had me fooled for a long time,” recalls Lawrence. “She was a huge sports fan and loved to watch the Brewers. So when I would visit her, I would ask, ‘Did you catch the Brewers game? What did you think of it?’ She would always have an appropriate response. It was so hard for me to believe that this woman who I would have these conversations with would have other behaviors” that were irrational and potentially dangerous.

Over time, Lawrence realized that the woman was using the newspaper to prep for her conversations with him. He visited one time when she hadn’t bought a paper in a few days, and she kept answering his questions as though it was several days earlier. He gently told her, “It might sound a little strange and I wouldn’t blame you for feeling that way, but would you believe that it’s not Tuesday? It’s Saturday.”

Once he realized that she was covering for cognitive difficulties, Lawrence was better able to work with the woman, her family and others to address her health and safety needs, while she continued living at home.

The many aspects of home health nursing—Lawrence includes nurse, case manager, building inspector and taxi cab driver among his roles—make it both rewarding and challenging, especially for nurses new to the setting. This summer, Lawrence wrote content for the home health track of an online residency program for nurses entering long-term care. (Our spring 2014 issue covered long-term care residencies, including Geri-Res, a project of the Center for Aging Research and Education.)

“The whole idea behind residency programs is that you’re trying to improve the success rate of people entering that environment,” says Lawrence. “Being a nurse is hard, even with 25 years of experience. Being a nurse is really hard with no experience. Really, really hard! So I’m happy to be able to share information about what’s unique to home care with nurses who are entering my environment.”

Lawrence decided to pursue graduate studies to expand his ability to help patients. Being in the DNP program has also allowed him to delve deeper into nursing research, a growing interest.

“As an undergrad, you’re so concerned with just learning the nursing process,” Lawrence remembers. “As a professional, you start to realize how relevant research is.”

“Research is so incredible in helping us understand why. Why do people get sick? Why can’t we make you better? And if we can figure out why, then what can we do to stop that from happening?”

Lawrence is driven to help others understand home health and the nursing profession generally. Even though his mother and grandmother were nurses, he didn’t always get what they did.

“I think nursing still, on the whole, is an undervalued, poorly understood profession,” Lawrence says. “Most people don’t know that assessing and recommending and questioning are the most important parts of what nurses do.”