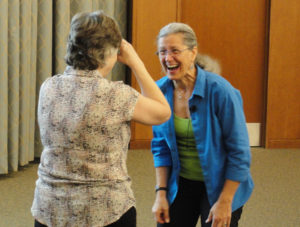 “It’s really a lot, but when it comes to dementia, it’s essential. It’s what every one of us would want. So what we’ve got to do is figure out how to take that and make it practical for organizations,” she said. “Families can’t do this alone.”

Snow was speaking at “Creating Dementia-Friendly Health Care Organizations,” an event organized by the University of Wisconsin–Madison School of Nursing, the School’s Center for Aging Research and Education, and ElderSpan, a local senior living services company with six residences among its locations dedicated to caring for people with dementia.

The event also included a panel of family caregivers of people living with dementia. One of the stories that they shared exemplified person-centered care.

“My mother spent an overnight at the hospital, having her heart monitored,” said Ginger Brand-Biere. “I was very nervous to leave her there, but I did go home and get some sleep. When I came in in the morning, there was a nurse who had been with her for a long time. Lucky for me and for my mom, she had the time. The nurse said, ‘Oh, your mom grew up in New Jersey. Her dad did this.’… My mom was totally fine, though she had never been in the hospital except to have babies. She was totally comfortable because this nurse had taken the time to just sit with her and listen to her stories.”

The family caregivers also shared negative experiences, such as health care providers speaking to them while ignoring the person living with dementia, who was also in the room. Some family members struggled to be included meaningfully in health care discussions. Others were frustrated by long-term care staff who seemed to ignore the information they had provided about their loved one’s identity and preferences.

Several family members identified screening for dementia and receiving the diagnosis as stressful events that are often not handled well.

“My mother was always terrified that she was going to come down with Alzheimer’s,” said Earl Barnes. “When she was tested, it seemed like she was there for a long, long time. When she came out, it looked like she had gone through a wringer. It was just devastating. She went to join the rest of us. The doctor who was in charge… said, ‘Your mother most probably has Alzheimer’s.’ There must be some better way to break the news.”

Teepa Snow had attendees role-play as either a doctor or patient doing an animal fluency test, which assesses cognitive function by the number of different animals a person can name in one minute. She advocated for making such simple screens part of annual check-ups. Doing so would not only reduce the stress and stigma around cognitive screening, she argued, but also document functional baselines and facilitate the early detection of cognitive changes.

“By the time we notice this disease right now, only two out of ten people are in the early stages,” explained Snow. “Eight out of ten are already to mid-stage dementia. … So we’ve missed some opportunities here. The current thinking internationally is no care for me, without me. I need to be part of care planning. I should have that opportunity. But here’s the greatest challenge we face—out of every ten people who get dementia, 50 percent of them, by the time we’re starting to notice it, have damage in the frontal / prefrontal cortex. What that means is for 50 percent of people, they don’t know what they don’t know. This is the part of the brain that allows me to be self-aware and to figure things out.”

Snow challenged health care organizations to think about how the care they provide must change, as an individual’s dementia progresses. “When you live with dementia until you die from dementia, you’re going to need the wide variation” of care, she said.

Preventative care is appropriate in the early stages, “but there will come a time when you can’t fix things anymore.” After that point, people living with dementia can benefit from restorative, maintenance and compensatory approaches to care.

As she synthesized the evening’s discussion, UW–Madison School of Nursing Dean Katharyn May, PhD, RN, FAAN, drew on her background as a perinatal specialist.

“When I was practicing with families and high-risk children, there were tools that we had at our disposal for public health nurses who made home visits on every identified high-risk new family,” said May. “I learned how to chart weight and height and a set of developmental benchmarks, and I knew within a month or two if a baby was falling behind. And then we called in the cavalry.”

May paused and then added, “We haven’t even started to think about how we call in the cavalry early enough, for all of the elders that we know are in the community and the ones that are going to come down the pike.”

“The good news is that you’re here,” she continued. “Decisions are made by those who show up. And increasingly, I sense people are showing up for this cause.”