In June 2020, University of Wisconsin–Madison School of Nursing graduate student Courtney Maurer, DNP, RN was coming up with ideas for her year-long scholarly project.

Early in the COVID-19 pandemic, student access to care settings was far from guaranteed. Maurer wanted to make sure that she could carry out her project and produce something that would make a difference. 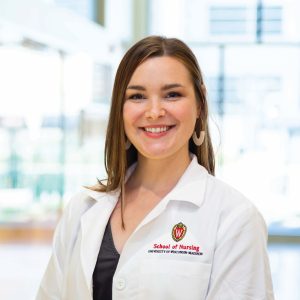 “June was a really pivotal month for the Black Lives Matter movement,” says Maurer, who has since graduated. “This time of important conversations and self-reflection prompted me to think about ways in which I was not comfortable as an ICU nurse. What do I really struggle with?”

She’s not the only one who finds it difficult. “Looking at the literature, I found that there aren’t a lot of resources, even in the medical field, that show patients with dark skin tones,” says Maurer. “People with dark skin tones are heavily underutilized in research studies as well. There just wasn’t good data or resources to support practice.”

Without specific training or resources, healthcare workers are likely to miss early changes in the integrity of dark skin. That increases patients’ risk of developing pressure injuries.

“We know that there are health care disparities,” says Maurer. “To address them, we need to analyze the data in a meaningful way. The focus tends to be on race or ethnicity. But some inequities are related to how people look. Dark skin doesn’t necessarily mean Black. People with dark skin tones can be African American, Asian American, Native American, or Hispanic.”

Maurer, who works at UW Hospital, talked to a clinical nurse specialist colleague about developing resources to assess patients with dark skin tones for her scholarly project.

“She got really excited,” says Maurer. “She had anecdotal examples of patients whose pressure injuries we noticed too late. She pointed out that we don’t really know how bad the situation is, because we don’t stratify our data by skin tone. So, the data can’t tell us if there are disparities based on the color of patients’ skin.”

That exchange led Maurer to expand her project plans. She decided to do a needs assessment with nurses on several UW Hospital units, develop educational resources, and explore how data could identify early changes in patients with dark skin and disparities with pressure injuries.

For nursing documentation related to early signs of skin changes, “I found that ten key terms were missing,” says Maurer. “Colors like ‘purple,’ ‘black,’ and ‘blue,’ which is how wounds show on darker skin. Localized ‘pain,’ which is appropriate for any skin tone. Tissue that feels ‘boggy’ or watery underneath. Areas that feel ‘cooler’ or ‘warmer’ than the surrounding tissue.”

Maurer brought these terms to the UW Hospital nursing documentation committee, which added them to the skin assessment that’s typically carried out every four to eight hours. After implementation, the most frequently used new terms were painful and purple.

“Purple is really important,” explains Maurer. “A lot of times what’s described as a bruise on a patient with dark skin is really a pressure injury. So purple is a good red flag for wound and skin care nurses, who can then follow up with the patient.”

“First, we expect the percentage of patients with pressure injuries who have dark skin tones to be low, because we’re not finding the injuries as well,” she says. “Then we expect to see the numbers become more comparable between patients with lighter and darker skin tones. That would suggest improvements in nursing assessment and documentation.”

“Over time, we expect pressure injury rates to come down, regardless of skin tone. That’s the goal,” says Maurer. “We’ll find skin changes sooner and we won’t have late-stage pressure injuries.”

In addition to changing practice at UW Hospital, Maurer’s resources have been added to the School of Nursing’s undergraduate curriculum and to the website of the national Advancing Excellence in Long-Term Care Collaborative.

Maurer is proud of how widely her resources are being used. But she’s determined to spread them even further. She and colleague Anna Doughty recently presented to Epic Systems. They want to convince the healthcare software company to include the objective skin tone tool in their standard electronic health record.

“Nursing assessments need to be more inclusive,” says Maurer. “The nursing role is key to getting buy-in and making change.”