For older adults undergoing surgery, delirium is a common and serious complication.

Older adults have a 15 to 50 percent chance of experiencing delirium following a major operation. And it’s older adults “who, as a group, undergo more than one-third of all inpatient operations in the United States annually,” notes Thomas Robinson, MD, MS, FACS, a professor of surgery at the University of Colorado School of Medicine.

Delirium—especially an extended episode—may cause an older adult to be hospitalized for longer, to lose physical or cognitive function, to have a delayed or partial recovery, or even to die. The health care costs related to delirium total more than $164 billion per year in the United States.

Robinson co-chaired an interdisciplinary expert panel that evaluated approaches to prevent and treat delirium. The American Geriatrics Society and American College of Surgeons released the resulting Clinical Practice Guideline for Postoperative Delirium in Older Adults in November 2014. “The goal of these guidelines is to improve the quality of surgical care for older adults,” says Robinson.

Delirium is a sudden, severe disturbance in mental function that can cause decreased awareness of surroundings; cognitive impairment affecting memory, speech, and sense of time and place; and behavioral changes such as agitation, extreme emotions and hallucinations. The older adult may seem easily distracted or withdrawn, have trouble speaking or understanding spoken or written language, or be combative, fearful or depressed.

While some of the symptoms are similar to those of dementia, delirium is different in that it has a rapid onset, immediately affects a person’s ability to focus or maintain attention, and its symptoms fluctuate significantly over a short amount of time. 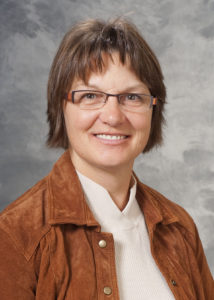 “Delirium is a critical concern for all hospitalized older adults, particularly for those who have dementia,” explains Barb King, PhD, APRN-BC, Assistant Professor at the University of Wisconsin–Madison School of Nursing. “Many times postoperative delirium is caused by the type of anesthesia used and pain medication, which can make it challenging for health care providers when trying to control postoperative pain in older adults.”

The new guideline stresses the importance of an interprofessional approach to preventing and treating delirium.

To prevent delirium, the guideline strongly encourages interprofessional teams “including physicians, nurses and possibly other healthcare professionals” to use multiple nondrug approaches throughout at-risk older adults’ hospital stay. Effective approaches include orienting the older adult to the time and their surroundings several times a day, having them walk as soon as possible following surgery and at least twice a day, and allowing them to wear their eyeglasses and hearing aids.

If an older adult experiences delirium, early diagnosis and treatment of the underlying causes are critical to shortening its duration and improving patient outcomes. Diagnosis is more difficult with people age 70 and older, who frequently have the hypoactive, or withdrawn, type of delirium. Yet the guideline shows that an interprofessional approach can make a difference.

The guideline cites a study of a nurse-led intervention where older adults at risk for delirium were routinely screened for cognitive function, allowing for early diagnosis. The intervention also included scheduled pain medication protocols for at-risk patients, and care team consultations with a delirium resource nurse, geriatric nurse specialist and psycho-geriatrician. This approach decreased the severity and duration of patients’ delirium and reduced their memory problems afterwards.

In the future, the guideline encourages prioritizing health care quality and research initiatives to address postoperative delirium in older adults. Other suggestions include policy incentives to improve the recognition and management of delirium and public education to minimize risk factors, such as heavy alcohol use.

The good news is that delirium is preventable in up to 40 percent of cases—and health care professionals now have more information to help prevent and treat delirium in older adults.

September 2019 update: A study by UW–Madison School of Nursing alumna Heidi Lindroth, PhD, RN and colleagues identified two measures that together predict the presence and severity of delirium following surgery.

“In the clinical world, we don’t have a way to predict which patients will be at the greatest risk for severe delirium after surgery,” says Lindroth, now a postdoctoral scholar with the Center for Health Innovation and Implementation Science and the Center on Aging Research at the Regenstrief Institute. “What’s more, in the research world, current tools only predict delirium as a binary, and most detection tools only look for patients with delirium at a level of impairment near that of dementia. This combination of tools gives a much-needed emphasis on the spectrum of delirium and a blueprint forward for future research into validation of our new tool.”